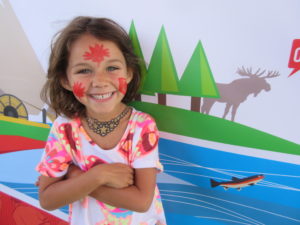 Richmond hearts will be glowing all-year long as the City has unveiled plans for more than 60 events to celebrate Canada’s 150th anniversary of Confederation. From tall ship visits to floral spectacles to major festivals, Richmond will be showing its Canadian pride in ways that celebrate our nation’s history, culture, diversity and uniqueness.

“Richmond residents are proud to be Canadians. The heritage and diversity we treasure here in Richmond are examples of what makes our nation one of the greatest places on earth to call home,” said Richmond Mayor Malcolm Brodie. “We’re excited to join in marking Canada 150 and we’ve planned a truly extraordinary celebration of this important milestone.”

A full calendar of Richmond Canada 150 events can be found on a newly launched website at www.richmondcanada150.com.

The highlight of Richmond’s Canada 150 celebrations will be a visit by Japan’s Kaiwo Maru tall ship. Known as the King of the Sea, the four-masted Kaiwo Maru is one of the world’s largest tall ships, at more than 110-metres (360 feet) in length. The Kaiwo Maru’s visit will be marked by a multi-day free family festival in early May and will include ship boarding, an open air headline concert in Garry Point Park and fireworks.

This spring, the City Hall plaza will be taken over by Our Home and Native Blooms, a spectacular floral installation. Using only native plants, designers will create a scene saluting Canada.

Internationally-acclaimed maritime artist John Horton has also been commissioned to create a new painting in celebration of Canada 150. The painting will become part of Richmond’s art collection and also be used as the basis for a major mural on a local building.

Richmond has received $80,000 from the Government of Canada’s Canada 150 fund, which is administered by Canadian Heritage. The funds will support the launch of a new annual Harvest Festival this fall and a High School Concert Series, being developed in partnership with School District 38.

“Through music and a unique festival, residents of Richmond—young and old—will celebrate the culture and historic importance of urban and local agriculture. The 150th anniversary of Confederation gives us the opportunity to join together and highlight the richness of our environment,” said the Honourable Mélanie Joly, Minister of Canadian Heritage. “Let’s take advantage of these festivities to strengthen our environmental awareness and to think about Canada’s future.”

The City has partnered with community groups to help fund dozens of other Canada 150 events and projects.

Richmond has also received more than $1.3 million from the Government of Canada through Western Economic Diversification to support Canada 150 infrastructure projects that will create long-lasting community legacies from the celebration.